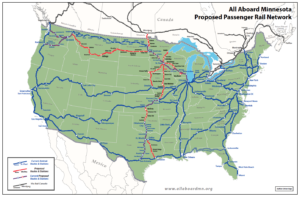 Existing railroad lines already connect many of our towns and cities. While true High Speed Rail might well transpire in the future, for today we offer our vision as the most practical, economically feasible, and politically-palatable way forward. (Please see our map of proposed routes).

Where we are now

Currently, the only intercity passenger train service operating in Minnesota is Amtrak’s “Empire Builder,” which is a long-distance National Network train, connecting Chicago with Seattle/Portland. This service operates on a daytime schedule between Chicago and the Twin Cities and on an overnight schedule between the Twin Cities and Minot. The Chicago-Twin Cities corridor has always enjoyed strong ridership as well as the Empire Builder route in general. 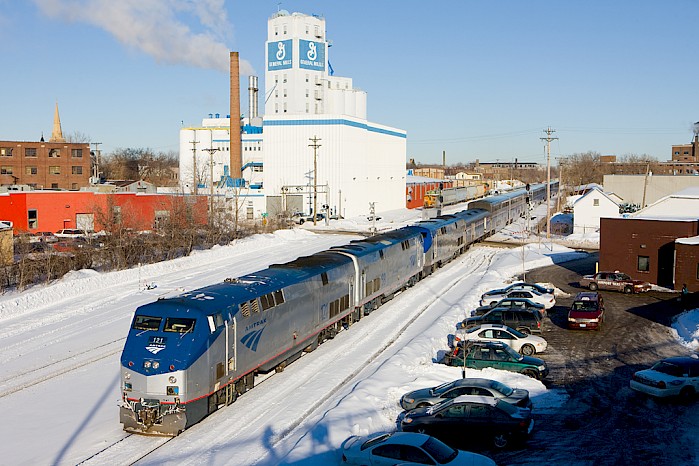 All Aboard Minnesota has studied all the potential rail routes in the state of Minnesota and surrounding region. We evaluated populations, current track conditions and speeds, past ridership and schedules, conducted surveys of Amtrak passengers and reviewed the Federal Bureau of Transportation Statistics Travel Survey data.

From these studies we identified seven “population corridors” that have potential for passenger train service in Minnesota and the surrounding region. These are places we believe improved train service during convenient daytime hours should be developed. Population served is a good proxy for ridership potential. For most of these corridors three trains each way (with morning, noon and dinner time departures) would maximize ridership and revenues. We believe these routes – if planned and designed carefully-would vastly improve rural and urban mobility options. They would allow safe and fast travel, even during the four months of the year that Minnesotan’s often can’t drive due to winter weather conditions. It would also bring new economic development to cities and communities across rural Minnesota. A Michigan study found $60 million a year in additional economic activity around their Amtrak stations after they invested in intercity rail.

Connecting Urban and Outstate Minnesota, and the Upper Midwest

In order for new intercity train routes to function effectively, and to achieve true connectivity between routes emanating from the Twin Cities, it will be necessary to develop a dedicated passenger train route between the two downtown ‘anchor’ stations (St. Paul Union Depot and Target Field Station); a distance of 11 miles. All Aboard Minnesota believes (and as studies have shown) that train services work best – and are most cost-effective, convenient, and economically-viable—when they link together to create a interconnected ‘network.’ The more city pairs that can be connected, the more ridership each route will have. It is our opinion, based on our railroad industry experience, that failure to connect the two downtowns and offer true “on-train” connectivity would be a costly policy mistake that will serve to hamper ridership.

In the green side bar above are the routes we propose connecting the state to the region, click on each for a description and our rationale. They are in order of priority based on ridership potential, cost and challenges to implement.

For the price of an airline snack box and beer, you can help further the cause of rail travel across the United States!